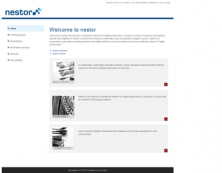 Nestor is the German Network of expertise in long-term storage of digital resources. On its website, and especially in its information database, publications, reports and other reports from Nestor itself as well as other organisations concerning these topics, can be found.

Nestor was set up as a BMBF (German  Federal Ministry for Education and Research) sponsored project (2003-2009) and has been continued on an independent basis by the former project partners together with other organisations since July 2009.

As a network it brings together a disparate array of institutions affected by digital preservation, experts and active project participants, all committed to the exchange of information, the distribution of tasks, the development of standards and the exploitation of synergy effects etc. Nestor’s work is not, however, restricted to Germany-based activities.  The partners maintain close links with corresponding initiatives in other countries and are actively involved in European and international initiatives and projects.